Reserve Currencies | Survival of the fittest

Yet another Munger word of wisdom on describing his perception of risk, was “show me where I’m going to die, so I’ll never go there”. A bit dark, but it fits quite well in introducing today’s discussion, since history does have a habit of repeating itself. And what better way to use history, if not to be able to anticipate the good, the bad and the ugly and act accordingly? You see, what we consider normal in our timeline, might be at the end of its own timeline in a much broader context. Given the shift in the balance of power among nations and their economies, this generation’s normal might now be due for a change. This article is a by-product of upcoming posts, that will outline and briefly look into the historical record of reserve currencies.

Because when there are major global developments, tensions, conflicts, wars, unexpected turmoil that might push down on the strong and lift up the rest, whispers of rising powers, who they might be and the chances of a change of scenery, are gaining ground. Possible shifts like this, imply a possible change in the global reserve currency as well. Or do they?

What are reserve currencies?

Held in large quantities by foreign central banks and major financial institutions, reserve currencies facilitate transactions, investments and given that global trade is measured in trillions, they make the world go round faster, relatively cheaper and most importantly safer.

Foreign exchange reserves are a way to meet foreign obligations, as well as appreciating a national currency when needed. A country uses its reserves to buy its own currency and increase its value when there is a risk of devaluation, so holding a substantial amount of foreign currency is the way to go.

The more demand for transactions in a specific currency, the more liquid it becomes. This provides easier access to capital for domestic firms since it can be acquired cheaper than it would, without the demand increasing its value. Other than the currency itself, investors tend to also hunt for securities denominated in the currency, like bonds that tend to be a safer bet in getting their investment back. Borrowing for the country becomes easier, allowing for investments, increased productivity, growth.

Important to note that with a strong currency, it becomes more expensive for foreign companies to buy a domestic product. It is also cheaper for domestic companies to buy foreign goods. By default then, imports increase and exports decrease, which raises the country’s trade deficit. A manageable downside though since an economy’s core doesn’t rely only on one variable.

The larger and stronger an economy gets, the more interlinked it becomes to the global economy. According to the World Bank: 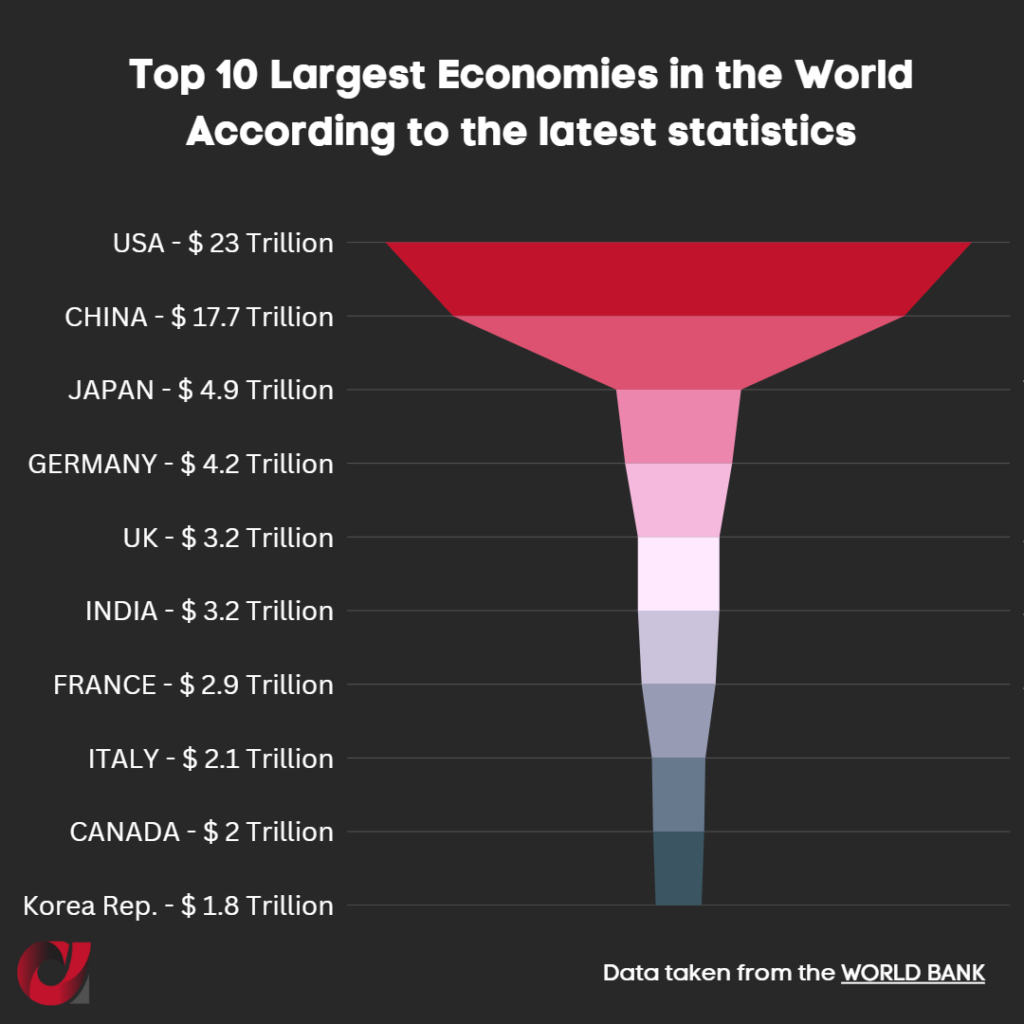 When other sovereign nations are using your currency as their own, when over 65 countries peg their currency to yours, and when over 90% of forex trading involves your currency, you know you dominate. On the other side, when your GDP starts to decline at the same time that the GDP of competing countries is on the rise (with outlook of surpassing you) and/or when you are repositioned as a major partner in the global arena (EU exchanged more goods with other partners in 2021 compared to the US), you know that times might be changing.

Notwithstanding that the sanctions of the war in Ukraine, relative to the freezing of more than half a trillion dollars of Russian reserves, begs the question. Should a country hold all it’s eggs in one basket and be subject to economic paralysis if it doesn’t comply with everyone else’s decisions? This senseless war is an extreme case and the international community correctly took action but we’ve seen what people/countries would do, to protect their interests. Could the inward shift – becoming less dependent on global supply chains – be reflected on the currency reserves as well?

The USD global reserves peaked in the year 2000 at 70% (from 0% in early 1900) and had a 10% decline by 2021. Small increases in global reserves in EUR, GBP, JPY, CNY, AUD, CAD are taking portions of the 10% but nonsignificant to challenge the USD yet. History wants dominant countries and their reserve currencies, to hold that position for 100 years on average. If that’s true and the US took over Britain in 1920 (some argue it was during or after WW2 in the 1940s), then the US has held that position for 80-100 years already. Is the geopolitical scenery, the decline in GDP, the rise of the GDP of competing countries and this “average timer”, a signal for an upcoming change?

For thousands of years to the end of WW2 that saw an almost bankrupt Britain and a shift in dominance from the British pound to the United States and the US Dollar, countries and their currencies were fighting for the spot at the top of the podium. Breath in – the Byzantines and their solidus/hyperpyron gave way to the Italian Florin and Ducat, that briefly gave way to the Portuguese Real, followed by the Spanish Real and Spain’s colonial ambitions, who then gave way to the Dutch and their Guilder, who were pushed out by the French and their Livre, who lost to Britain and the British Pound who finally gave rise to the United States and the US Dollar – breathe out. 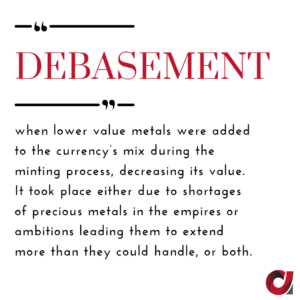 And in all of the above, the country standing at the top of the podium was constantly challenged leading to conflicts and wars, the necessary funding of these wars, retreats and abdications, debasement (see image) of the currencies, ultimately leading to the fall of one empire and the rise of another.

Debasement from what though?

From common metals like bronze and copper to precious metals like silver and gold, the mint (construction) was specific to the territory/country. The weight and the content of the metal varied and at times of scarcity, with the precious metal in the coin hardly recognizable.

Before we delve into the actual reserve currencies, their timelines, the significance of understanding what happened in the past to help us anticipate what might be coming in the future, here’s some conversation starters (or conversation enders depending on whom you ask)…

Barter was a system of exchange, that dates back thousands of years. Goods and services were exchanged for other goods and services, and that concluded a transaction. Simple. 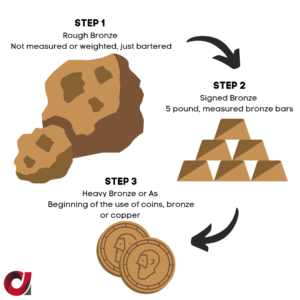 We could go even further back to the Chinese, the Lydians, the Greeks and times where only agricultural products were used for trade. In our example though we can see clearly the evolution of first having a rough medium of exchange accepted for trade, to a more fair (measured and weighted) unit of the same, to an easier to handle, transport and store coin. Cattle, general livestock, or grain were messy, required care, maintenance, space. Metals were preferred because they lasted longer and could be easily stored or carried around for miles through the trade routes. 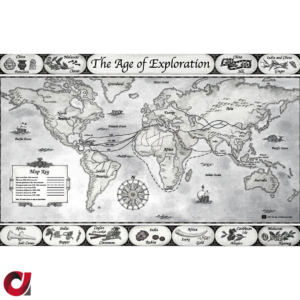 Trade routes at that time, were all land locked. Traders were still exploring to find safe passages and it wasn’t until approx. 110 BC that the Silk Route was established connecting China and Southeast Asia with Africa and Europe. Trade routes via sea, were recorded during the Age of Discovery/Age of Exploration. That was when European countries wanted to explore the world in the 1400s. It opened up a world of opportunities as well as brutal competition, which led to the discovery of the Americas as well as new trade routes to India and the Far East.

All of the above are characteristics of the evolution of the early trade to the monetary systems we understand today. From the minting of the coins, to their value outside the boundaries of the nation (since more precious metal content in the coin made it sought after for trade), allowed new empires to rise, on the demise of another.

Past a nation’s investment in itself i.e. innovations, technology, education (also required traits at older times), things remained the same relative to who’s on top. Productivity/output, competitiveness in global trade, military competences, and the recognition of currencies as reserve currencies declared the winner. Getting there is one thing, staying there is another. There’s an old saying “a bird in hand is worth two in the bush”. You should be content with what you have rather than risk losing it all for something bigger, which is what happened every single time. No risk, no reward though and this risk is what formed the world as we know it today.

So, what were the main attributes of the years 1200 onwards relative to global reserve currencies? How did empires rise and fall and what where the characteristics of their currencies? What is the relevance today and what lessons can we possibly learn from it?

The information provided is strictly for informational use. It is not meant in any way to be construed as investment advice. One should seek expert advice, as all as investment strategies involve risk of loss.

Lets look into all these together!

We discuss so much cool stuff during our Capital Market Training sessions. Thus enhancing our communication skills and allowing us to step into another level of personal achievement. This is not just another training session. It was made for Sales Teams to professionally communicate with their clients, but its now directed to anyone.