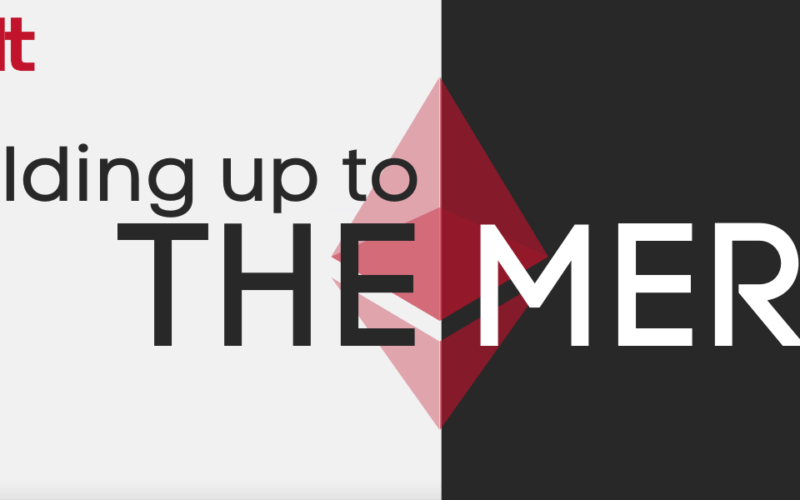 Keeping it simple – What, when, how, why

What – The Merge is Ethereum’s transition from Proof of Work to Proof of Stake consensus protocol. The transition involves the launch of the Beacon Chain (went live in December 2020), the Merge (case in point) and the Shard Chains which will come in later to improve the network’s scalability.

Shards? Think of 12 people standing on top of each other. The one at the bottom can hold the rest, but the weight is causing some neck & back problems. Now split them up from 1 person holding 11, to 6 holding 2 or more people. Less pain, more gain.

In the case of Ethereum’s blockchain, it’s currently a single chain that holds all the network’s transactions in consecutive blocks. The sharding upgrade will break down the large database, into smaller, manageable pieces (64 to be exact). Combined with rollups (packaging many transactions in a single one and submitting it to the chain as one) reduces the data required for a transaction.

How does it improve scalability? If the network can handle thousands of transactions per second (TPS), it can serve a huge amount of users improving congestion and usage spikes. 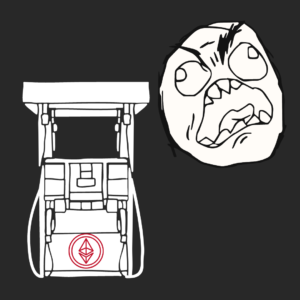 Why – To improve Ethereum’s sustainability as it currently requires vast amounts of energy for validation. It will reduce its requirements by 99.95%. It would be great if gas fees and transaction speeds got better as well, but this won’t be the case with the Merge.

Gas fees? The cost of a transaction on the Ethereum blockchain. After the London upgrade last year, the cost is derived from multiplying {the base fee (cost of gas) + optional tip} by the transaction cost.

Why do gas fees need improvement? Because as the network got more congested, these costs increased exponentially. Especially after the massive interest in NFTs. A user can’t always wait for low peak times to make a transaction (which kinda’ sorta’ fixes the problem), so improving the overall structure would be great. 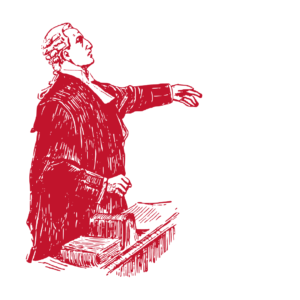 What is a Smart Contract?  Contracts (programs) that exist (created and validated) in the blockchain’s network. After their addition to the blockchain, they are enforced by the network. No need for a third-party enforcement i.e. lawyer or bouncer.

The Ethereum platform has been extensively used for Initial Coin Offerings (ICO boom of 2017), where new tokens are launched using the ERC standard.

ERC – Ethereum Request for Comment is a standardized document with rules that Ethereum based tokens must comply with. Programmers use the ERC to write Smart Contracts on the Ethereum blockchain. The community then reviews and comments on it through the EIP.

EIP – Ethereum Improvement Proposal – the comments of the community. Once received, the developers revise and implement accordingly. 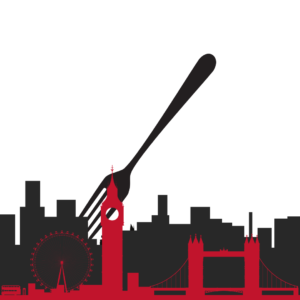 Example of EIP 1559 during last year’s London hard fork. It split the transaction fee that used to be directed to the miners, to a base fee + tip. The base fee gets burned (removed from circulation by the network) while the tip goes to the miners. The base fee is algorithmically calculated based on network congestion. If many transactions are fighting to be included in a block, the base fee will be higher.

Note: The EIP 1559 (burning) combined with the PoS upgrade (the Merge), will reduce Ether supply by more than 80%. The event is known as triple-halving.

What is halving (as we know from Bitcoin)? When the reward for Bitcoin is halved or cut in half. So triple-halving for Ethereum, is like halving Bitcoin 3 times.

The issue of new Ether will drop significantly, the burning through the EIP1559 and the staking of Ethereum to be eligible to validate (which can’t be withdrawn for at least 6 months after the Merge) will see a huge Ethereum supply drop. Increased demand combined with decreased supply, has speculators targeting a $5,000 breach. Ethereum already came close to this target in 2021, when it climbed up to $4,800 after major updates (Berlin and Uniswap) and the sale of Beeble’s NFT for a staggering $69.3 million (Pak’s NFT “The Merge” sold for $91.8 million in December of 2021).

ERC standards in a nutshell

Birth of Ethereum Classic. ETC was born after the DAO hack in 2016 – set of smart contracts for a Decentralized Autonomous Organization. DAO was a venture fund (high risk/high reward investment pool). Its investors had voting rights on the assets that the fund would invest in. It raised millions of $ worth of ETH, a third of which was hacked and stolen.

The community proposed to hard fork ETH to restore stolen funds. Some refused. After a vote in 2016, Ethereum was hard forked to Ethereum Classic (ETC).

To place the size of these two in perspective, analyzing the numbers today (11/08/2022)

Quick facts about PoW: It requires advanced equipment and vast amount of electricity to solve complex equations. The better the equipment, the faster the complex equation can be solved – unfair match? Wasteful and vulnerable to attacks (51% attack – mining pools that control more than 50% of the mining hash rate). Mining pools defy the main purpose of why blockchain technology is a step forward for us all, which is decentralization.

What is hash rate? Total computational power used by the network to process blockchain transactions. In essence, how many calculations can be performed per second.

The next step in Ethereum’s evolution is the transition from PoW to Proof of Stake (PoS) consensus. PoS has a more random selection. Participants (nodes) stake their assets. Dishonest validations means losing one’s stake and reward. Some algorithmic activity finalizes the choice of validators as well (like coin age base selection where a forger’s coin age is reset to 0 after forging a new block, and a waiting time of 30 days is needed to be selected again).

Fast forward to December 2020, Ethereum 2.0 went live initiating (phase 0) of PoW to PoS transition. Ethereum 2.0 chain is called the Beacon Chain. ETH 1.0 and ETH 2.0 exist side by side until they Merge together.

One of Ethereum’s test networks called Goerli, ran a final test on August 11, 2022. It simulated the process that Ethereum will go through in September. The test validated the reduced energy requirements, and that the merger process works.

The world is now counting down the remaining time to the Merge.

Investors don’t need to do anything before or after the Merge. Ethereum.org warns against scams with the disclaimer “you should be on high alert for scams trying to take advantage of users during this transition. Do not send your ETH anywhere in an attempt to “upgrade to ETH2.” There is no “ETH2” token, and there is nothing more you need to do for your funds to remain safe”

The information provided is strictly for informational use and is not meant in any way to be construed as investment advice. One should seek expert advice, as all investment strategies involve risk of loss.

Currently considered one of the top offshore forex license options, the Belize forex license has established itself among one the best to have. With a higher capital requirement, the Belize option provides some insight into the level of capital available and seriousness of the Broker associated. Belize also offers a favourable Tax framework. Although there are reporting requirements, physical presence for board meetings is not required (with other solutions being acceptable). Belize maintains a good reputation in trader communities (compared to other offshore jurisdictions).

to answer the most frequently asked questions we receive on a Belize Forex License:

How does someone start the process to obtaining a Belize Forex License?

As with most licenses, the first step is the formation / incorporation of a Belize company followed by the process of collecting/submitting the necessary documents and finally evaluation and approval/rejection of the license by the regulator. Further questions, documents might be requested throughout the process but with the final approval, the license fees are paid to the regulator and the steps for opening a corporate bank account to deposit the capital requirement can start.

If you have Institutional business as a network and operate through a forex IB or White Label program, jurisdictions like Belize may be considered a “pricier” option when considering to start your own brokerage, but it does give a strong impression regarding the seriousness of your business. Unlike working unregulated, Belize will provide comfort to your clients who need a regulated broker to support their trading needs.

Find out which brokers are registered in Belize today as well as the country’s latest economic data.

In this regard, some of the documents required (but not limited to) are:

All documents that are presented in the case for application and company formation should be complete, duly signed and notarized by a Belize notary. If the original documents are not in English, these should be translated and certified locally. For government issued documents, there may be a requirement for these to be apostilled.

Information on the corporate structure requirements of a Belize forex license

Shareholders and Directors are not required to reside in Belize, however they are required to have appropriate background and experience fitting their roles. They should have a clean criminal record. There must be a local director (Belize resident) on the board. In order for the process of the license to begin, a local entity must be established with all the relevant documents and information submitted. Belize is FATCA compliant, but still maintains the discreet handling of banking and transaction details.

A company that is looking to acquire a Belize license, will be required to have a capital adequacy of no less than $500,000 and will be required to pay a yearly fee of $25,000. The company will be required to keep up-to-date records and maintain regular reporting with the regulator at the prescribed periods (Reporting will include – but not limited to – capital, income, as well as the number, volumes and values of all executed trades. It is important to select the name of the company correctly and according to the guidelines of the Belize authorities.

In order to benefit from the various corporate incentives for operation of international business, it is important to note that no transactions should be conducted with local Belize entities or individuals and that the Belize Dollar should not be a currency offered for trade / transaction.

Looking for a Belize Forex License? Contact us today too look into the details

Time frames to get the Belize forex license:

It’s in the discretion of the national regulator to approve, ask questions or even reject any application depending on its complexity and structure. Process should be completed within 3-6 moths from submission of application. Our initial (internal) assessments are usually enough to identify problems (if any) in the early stages, thus maintaining excellent time frames.

How allFX-Consult can step into this picture:

allFX-Consult is a capital markets and forex consulting agency, catering to quality rather than quantity. For over a decade, our Directors have been connecting with some of the best individuals/professionals, service providers and brokers the industry has to offer so that we can meet any forex corporate challenge.

Because of this, allFX-Consult always has a counterpart/partner for any corporate structure. Before we make any recommendations, we thoroughly examine all possibilities. We’re chosen for being discreet, detail oriented and deadline driven.

Contact us for a private conversation to discuss your case through the contact form or one of our emails at info@allfx–consult.com, partners@allfx-consult.com.

What is a Forex White Label – should you go ahead and get one?